A well informed and broad NYTimes article about the our changing reading habits since the introduction of e-readers.

The story with the growth in e-book readers was somewhat different from the story with tablet computers. Ownership of e-readers among women grew more than among men. Those with more education and higher incomes also lead the pack when it comes to e-book ownership, but the gap between them and others isn’t as dramatic. For instance, 19% of those in households earning $30,000- $50,000 have e-book readers. They are 12 percentage points behind those in households earning $75,000 or more in e-book reader ownership. The gap between those income levels on tablet ownership is 20 percentage points.

Source: The Dec. 2011 and Jan. 2012 results shown here are from three new surveys by the Pew Research Center’s Internet & American Life Project .The Dec. 2011 results are from a survey of 2,986 people age 16 and older conducted November 16-December 21, 2011. The survey was conducted in English and Spanish and on landline and call phones. The margin of error is +/- 2 percentage points. The Jan. 2012 results are from a combination of two surveys, one conducted January 5-8, 2012 of 1,000 adults age 18 and older and the other conducted January 12-15, 2012 among a sample of 1,008 adults. The overall margin of error in the combined Jan. 2012 dataset is +/- 2.4 percentage points. The January surveys were conducted on landline and cell phones. They were conducted only in English.

12% of e-book readers have borrowed an e-book from a library. Those who use libraries are pretty heavy readers, but most are not aware they can borrow e-books. 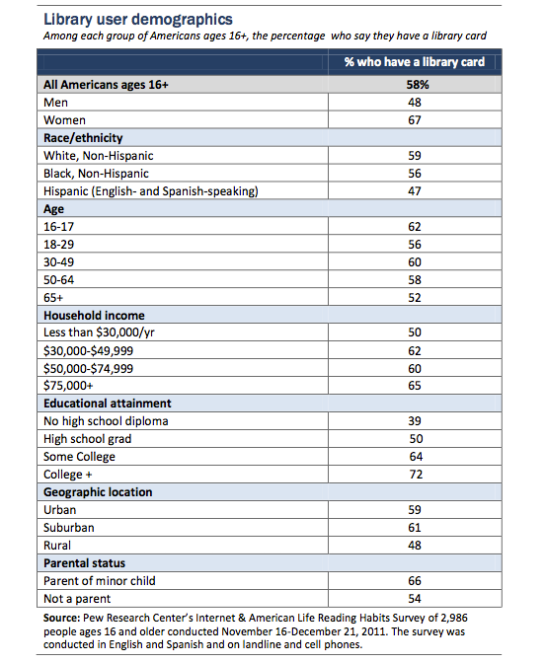 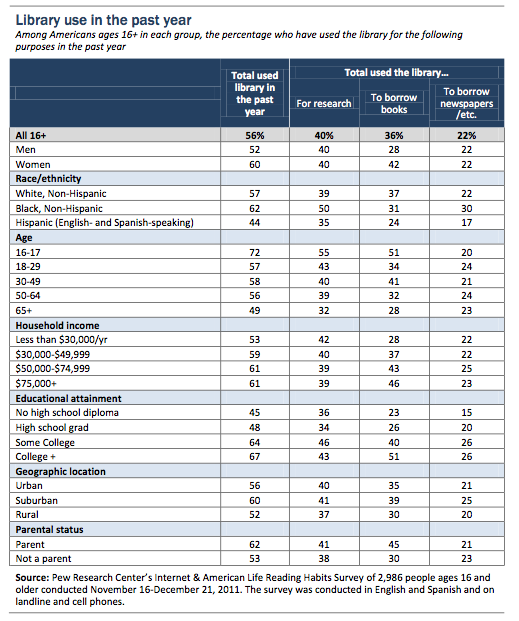 Overall, the number of book readers in late 2012 was 75% of the population ages 16 and older, a small and statistically insignificant decline from 78% in late 2011.